Shop ’til you drop

With shoppers abuzz about the impending arrival of international discount retailing giant Costco, the race to construct its massive Sydney outlet and corporate headquarters was on.

While Melbourne beat Sydney to the punch when it came to the longawaited opening of Costco, when the time came for the construction of the Sydney outlet there were no holds barred.

Located in Auburn, in the city’s south west, the $35 million Sydney operation was to combine 14,000 square metres of warehouse and distribution space, set above two levels of car parking, along with 2,000 square metres of mezzanine office area to serve as Costco’s Australian corporate headquarters.

There was an extraordinarily tight deadline on this project, with demolition of the old buildings on the site commencing in August 2010 and shelves due to be racked, stacked and open to the public by June 2011.

This requirement for speedy construction made precast the logical choice. It was used in a combination of load-bearing and cladding applications, including moulded and textural finishes in line with the aesthetic requirements of the architect.

Demolition and site remediation meant the build itself could not commence until October 2010, when the ground slabs were poured and the basement – or car park – panels were installed.

Austral Precast won the tender for both supply and erection of the precast and worked intensively from the outset on the buildability aspects of the project with the builder, architect and engineer. A close pre-existing relationship between all three parties enhanced this process.

“Precast was the critical path on the project and we worked co-operatively at every stage, from the shop drawing process through to the manufacture and then installation – something that’s essential working on a project of this scale and timeframe,” says Aaron Hadfield, Austral Precast NSW General Manager.

“We also had input to help make the building more suitable for precast, including maximising panel sizes, working with Costco and the engineer to ensure walls were capable of taking design loads for the structure and making subtle adjustments along the way in the planning to ensure optimum outcomes for all concerned. The really big issue we faced with the timeframe was project management – working with the project manager and co-ordinating multiple trades including formworkers, steel fixers, structural steel installers and in-situ footing concreters. So thinking ahead was critical.”

The project entailed manufacture and installation of 314 panels averaging 16.3 square metres each and with thicknesses varying from 200mm to 300mm. Reckli architectural form-liners gave an etched pattern to the panels and false joints were incorporated in the design for added effect.

The high level of co-operation and attention to detail on the job meant that, in June 2011, the shelves were racked, stacked and ready for the grand opening – on time, and on budget. 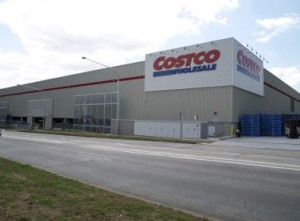