Posted at 11:39h in News by National Precast 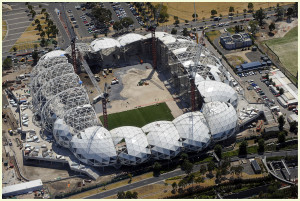 As well as winning a slew of awards, AAMI Park has now also been blessed with being named as one of five of the world’s ‘coolest’ stadiums.

The iconic stadium features hollowcore precast flooring, which was chosen for its low embodied energy and speed of construction. The hollowcore was supplied by National Precast member Hollow Core Concrete.

Designed by Cox Architects, the $267.5 million stadium has won around 20 awards, including the 2012 World’s Most Iconic and Culturally Significant Stadium Award in Doha, Qatar and the 2011 National Architecture Award for Public Architecture.

Read more about the project here and read about the other ‘cool’ stadiums here.